Law enforcers in Dubai have picked up at least 87 homeless Ghanaians who have been putting up at a park due to the coronavirus pandemic.

According to Dubai police, majority of them have been out of jobs since the COVID-19 outbreak in the country.

Dailymailgh.com understands that the police are keeping the homeless Ghanaians at a temporary location at a town called Al Quoz.

Many from the group said they lost their jobs before the coronavirus outbreak and some since. A few others went there in search for work on visit visas and were stranded when the borders closed on March 19.

“We wanted to help solve this problem because we know many of them have lost their jobs or are on visit visas,” a Dubai Police spokesman said.

“After we were alerted of their situation, we transported about 40 or 50 of them to accommodation where they could sleep.

“We are in contact with the embassy and consulate to help these people.”

The Jebel Ali site is a series of air-conditioned tents, where officers said the group could stay until their embassy was able to help them.

When pictures of the group sleeping in the park emerged on social media, residents from across the city delivered food and water to help.

Moses, a father of five, was one of the men given accommodation.

“Now we have food and drink and a safe place to rest,” Moses said. 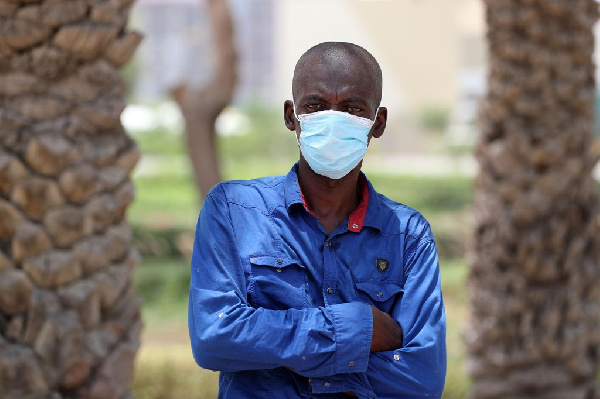 Nuhu Sharubutu lost his job last summer and paid to extend a visit visa while he looked for work. Chris Whiteoak / The National

“I was sleeping in the park for about a week and volunteers were bringing us food. It was very difficult in the heat.

“Some police officers came on Sunday night and told us they will get us accommodation and within a few minutes a bus arrived and took us to Jebel Ali.

“The police have consoled us, motivated us. We didn’t get this from our own government but the UAE people, they’ve helped us.”

Moses said he arrived in Dubai on December 12 on a visit visa to look for work. After months of job hunting, he ran out of money.

He wants to stay in the UAE to find a job but will probably have to return home.

Michael Agyapong, 23, was one of the group who did not opt for temporary accommodation.

Mr Agyapong said he would stay in the park and visit the nearby consulate each day in the hope of getting home.

“I don’t want to be a burden on the UAE and keep taking food and drink from people,” he said.

“It brings shame on me, I just want to go home to my daughter, mum and dad.”

Mr Agyapong said he arrived in Dubai on March 3 after paying more than Dh5,000 for a flight and visit visa.

A friend working in Dubai had assured him he would find work quickly, but job opportunities dried up when the coronavirus outbreak hit.

“I don’t have social media, I don’t follow news much, so I was not aware of how bad the pandemic was getting when I came,” Mr Agyapong said.

“I paid Dh700 for a share room in Dubai and then moved to Ajman because it was cheaper. I paid Dh400 for a bed space.”

Unable to find a job, Mr Agyapong called a travel agent in mid-March to book a flight home but the borders closed on March 19. 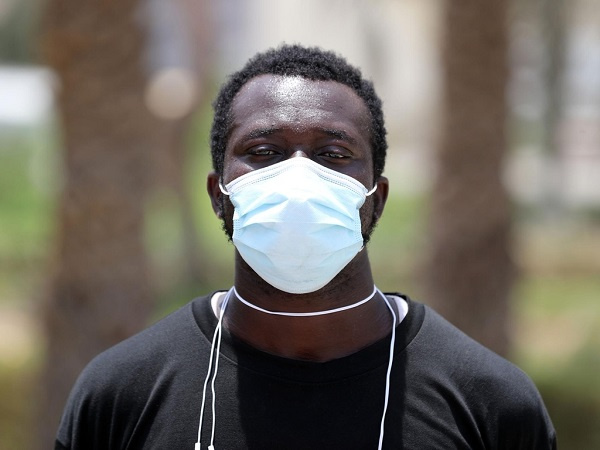 Michael Agyapong, 23, wants to travel home when flights open up but cannot afford the flight ticket. Chris Whiteoak / The National

“Now I have no money left,” he said. “I need our consulate and government to help me get home.

“I’ve been sleeping outside for about one month now and I don’t have funds to buy a flight ticket when they become available.”

Some people in the group, who did not want to be identified, said their employers still had their passports, which is against the law, despite being let go from their jobs.

Meanwhile, the consulate general of Ghana said it was working to resolve the issue.

“Some members of the group first reported at the Ghanaian consulate on the evening of May 25 and were addressed by the consul general the next morning,” said Kofi Mumuni, from the consulate’s welfare department.

“The consul general pleaded with them to return to their various accommodations in the UAE while staff finalised ongoing arrangements for their evacuation to Ghana.

“While they agreed and left the consulate, some of them went to camp at the park.

“We have been working with Ghana and the UAE authorities in collaboration with Emirates Airlines to evacuate our stranded nationals and arrangements are almost concluded.”

Meanwhile, the National reports that a Dubai charity has stepped forward to help repatriate the Ghanaians. Dar Al Ber Society, a government-established charitable organisation in the city, has also set up a donation drive to help buy plane tickets home for the group.

“After we heard about their situation through a contact, we went down to the consulate, where many of the group were gathered and handed out food and drink,” said Juhi Khan from Dar Al Ber.

“We are now trying to help arrange tickets for these people through our Zayed Happiness Caravan initiative as many wish to go back to their home countries to be with family.

“The money raised will be used for food supplies and air tickets home for as many of these people as possible.

“We have set up an account so if anybody would like to contribute in helping these people legally, they can.”

Mona Gucci replies Yvonne Nelson’s lawsuit, warns her not to disgrace herself

This poll is no longer accepting votes

North and South Korea restore hotline after a year

North and South Korea restore hotline after a year